Did You Know That Catherine The Great Of Russia Had Contact With GM Pinto?

Catherine The Great initiated the correspondence with the Grand Master Pinto da Fonseca and these letters are stored in the National Library of Malta.

In those letters, Catherine acknowledged that Russia needed the help of Grand Master for improving the situation of the Russian Navy.

The Grand Master replied that he could send two of his knight Chevalier the Marquis Sagramoso and Chevalier Count Giulio Renato de Litta to help at the Russian navy. In 1789 Giulio de Litta arrived to St Petersburg to help the Russian fleet to sail around the continent of Europe and into the Mediterranean. Giulio de Litta had received the title of a Russian General from Catherine the Great, when he was just 26 years old and he became the youngest General in Russian history. This fact demonstrated how important was for the Czarina to build friendly relations with Malta.

The next year few Russian officers went to train in the Order’s navy. Among them were Admiral Sergius Babinkoff, Lieutanant Timotheus Koslaninoff and the officers Ivan Selifontoff, Nikolai Skuratoff, Fedor Mossoloff, Matthaus Kokowzoff, and Nikolai Ragosin from St. Petersburg Naval Academy. In his letter Grand Master Pinto had demonstrated his “joy” for the Catherine’s high respect for the Order’s navy. The Grand Master had assured that the Russian officers would be most welcome and would be treated on equal terms as the Knights.

(N.B: This information was provided to us by Mr. Denis Galea Vella Maslennikov who did his research about ‘Personalities and their role in establishing the Maltese-Russian relations’ for his National Diploma in Tour Guiding.) 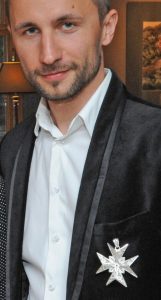