On 28 March 1566 Grand Master de Valette has laid the foundation stone of a new city of Valletta.

A recent book “Humillima Civitas Vallettae” has revealed new facts about this event. It includes the notes by the Augustinian preacher Fr Spirito Angusciola (1534-1586) and the official historian of the Order Giacomo Bosio (1544-1627). These notes indicate that GM de Valette laid the foundation stone himself under the wall of the bastion named after St John the Baptist (on the left side from the entrance to Valletta).

It makes sense, as St John is a patron saint of the Order and laying the foundation stone under the bastion named after him could create a stronger protection for the city. 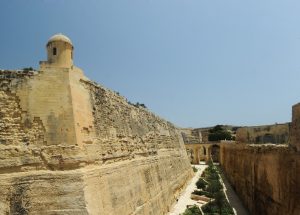 The foundation stone was engraved with an 8 pointed cross, the date and an inscription in Latin, commemorating the date. This stone was laid in the ground together with the golden medals and coins, which had been minted specifically for this occasion.

For many years it has been considered that the foundation stone has been laid on the spot of Our Lady of Victory church. You can even see a plate near the church mentioning that event. This assumption was based on the fact that it was the first building in the Valletta’s construction plan.

In 1924 the assumption became a “fact” because it was emphasized by the Committee of the Malta Historical and Scientific Society. This is when they installed a marble plate on the church, indicating that it was the spot of the foundation stone. 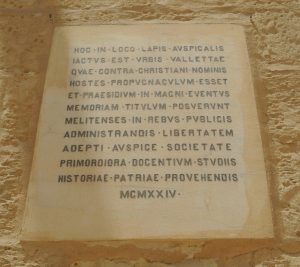 One can find more details about this case in the book “Humillima Civitas Vallettae”.